Long last we meet, only for me to leave hurriedly, for I could not recognize you, like the moon hidden behind the clouds. 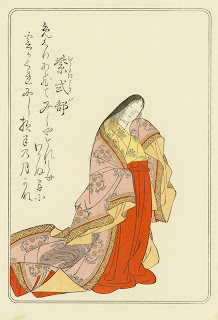 The lady-in-waiting...
Murasaki Shikibu (c. 973 - c. 1014 or 1025), known as Lady Murasaki in English, was born in Fujiwara family and might have been Fujiwara no Takako, who was mentioned in a court in 1007 as an imperial lady-in-waiting but her name, as well as names of many other women, is not known and can only be guessed.

As a child Takako was very intelligent and even learned more quickly than her brother. Her father was lamenting how happy he would have been if she was a boy, but she was allowed to study with her brother and even learn some Chinese classics, which were considered improper for females at the time.

In her early twenties, which was rather late for the period, she got married to her father's friend Fujiwara no Nobutaka and her only daughter, Keishi (Lady Kataiko), later known as Daini no Sanmi (poem 58), was born in (probably) 999. After the death of her husband in 1001, she became a lady-in-waiting for empress Shoshi. Her diary evidences that she exchanged poetry with Fujiwara no Michinaga, leading to speculation that the two might have been lovers. Anyway, there's no real evidence that she was brought to court as Michinaga's concubine and it is more likely that she was brought there to educate his daughter, empress Shoshi.

In the court, according to her diary, The Diary of Lady Murasaki (Murasaki Shikibu Nikki), which she kept for two years, most likely 1008-1010, she was nicknamed 'Murasaki' (purple wisteria, wisteria coming from her family name Fujiwara) after a character in The Tale of Genji, which is one of the earliest novels in human history, also a piece Murasaki Shikibu is best known for. Shikibu in her name refers to her father's position in the Bureau of Ceremony (shikibu-sho). 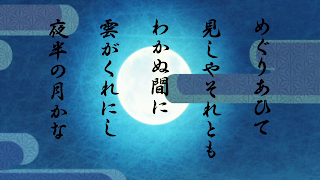 ... and the moon behind the clouds
The interpretations of this poem differ depending on whether we take the headnote in Murasaki Shikibu kashū (collection of poems) to be written by herself or not. The note says that she had known someone as a child and briefly met that person, who hurriedly left, as if going after the moon - like the moon hidden behind the clouds. The person is believed to be a woman, whom the poet compares to the moon. Then, the poem, even though it sounds like a love poem, uta koi, would be a poem about an old friend.

Giving a pleasant translation of this poem is impossible. The connotations of many words are so delicate and have so many meanings, that you can't put everything to one place. Just look at the examples. Meguriaite has a meaning of 'meet by chance' but can also mean 'partners on a pilgrimage'. Sore to mo is 'if it were/as if' and sore tomo is 'one-time friend'. Kakure nishi can mean 'had hidden' or 'western refuge', while nishi means 'the two' and kumogakure means ‘disappearance’. This poem, just like some other poems in the Hyakunin Isshu, was read differently depending on time. In some versions from Edo period or later, the last line reads yowa no tsuki ka na (moon at midnight), instead of yowa no tsukikage (the moon's ligh/silhouette). If you know a bit of hiragana, notice this part in the poem written above and the poem below, written in kana. The second one uses tsuki ka na.

The translations might greatly vary because of the interpretation the translator chose and the poem which he had as the original one. Some translations even mention a male person that Murasaki Shikibu saw, not a female like some others believe, and it comes from the diary note mentioned earlier.

But with all the things said, this poem is probably the most rafined in the anthology, both complex and ambiguous. 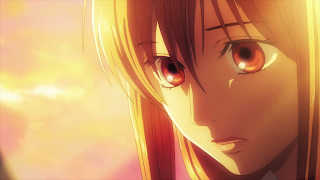 The interpretation of this poem in Chihayafuru is probably the best clue of how Chihaya feels about Arata. The poem that sounds like a love poem, yet it is a poem about an old friend.

"Long last we meet... It seems to fit Arata. Whenever I get to meet him, he has to leave right away. It sounds like a love poem, but this poem is about a girl who was her [Murasaki Shikibu's] childhood friend... It fits perfectly." Chihaya, episode 20

In karuta this poem is one of the so-called "Mu Su Me Fu Sa Ho Se" [むすめふさほせ] cards, or simply first-syllable cards. 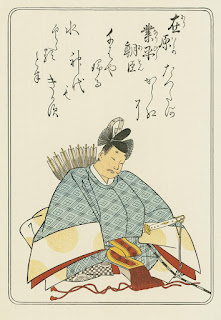 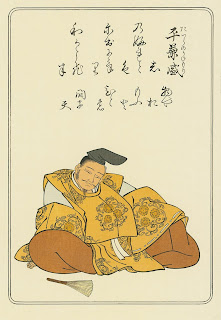