For you, I head out to the fields to pick spring greens while snow falls upon my sleeves. 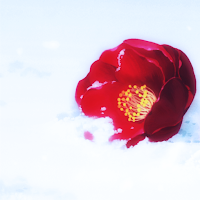 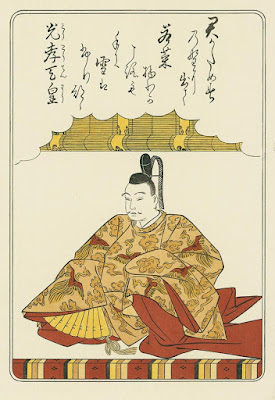 Intelligent, avid reader and musician, prince Tokiyasu was much loved by his paternal grandmother, Grand Empress Dowager (太皇太后 Taikōtaigō) Tachibana no Kachiko 橘嘉智子 (786−850), but as the imperial line proceeded through his older half-brother Emperor Montoku (文徳天皇 Montoku tennō; 827−858) and his descendants, Tokiyasu was fulfilling other princely roles.

In 884 Tokiyasu’s great-nephew Emperor Yōzei (陽成天皇 Yōzei tennō; 868−949; Hyakunin Isshu 13) abdicated, and with the support of Yōzei’s uncle, his own cousin Fujiwara no Mototsune 藤原基経 (836−891), Tokiyasu ascended the throne. 54-years-old at the time of ascension, Emperor Kōkō, also mentioned in sources as Ninna Emperor (仁和帝 Ninna no mikado) or Komatsu Emperor (小松帝 Komatsu no mikado), is thought to have been selected because of his intelligence and strong moral principles, which would have stood in stark contrast to young Yōzei’s unpredictability.

Emperor Kōkō’s reign only lasted three years, until his death in 887, but his intelligence and sensibility are noted not only in history books, but also expressed in surviving poems, fourteen of which are in imperial anthologies, while fifteen are recorded in his personal collection Ninna Gyōshū 仁和御集 (Collection of Imperial Compositions by the Ninna Emperor), which seems to be a collection of his most accomplished compositions. 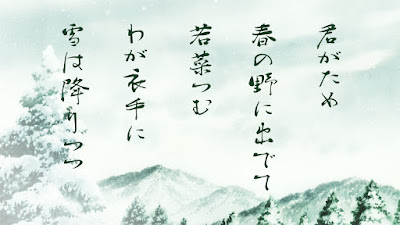 For you I head out to spring fields...

Emperor Kōkō’s poem in the Hyakunin Isshu is a spring poem, but this spring is the very beginning of the year − the seventh day of the first Lunar month − when seven spring herbs are gathered in the fields, cooked and eaten in hopes of warding off evil spirits and wishing for good health. The seventh day of the first Lunar month would fall sometime around February or March of the Solar calendar, which Japan adopted in the Meiji period (明治時代 Meiji jidai; 1868−1912), leading to a modern a celebration known as Festival of Seven Herbs (七草の節句 Nanakusa no sekku) being observed on January 7th.

Emperor Kōkō’s composition commemorates the old celebration on the seventh day of the first Lunar month. According the headnote in Kokinshū 古今集 (Collection from Ancient and Modern Times; 905), it is a poem sent to someone with first herbs, when the Ninna Emperor was still an imperial prince. Thus, the poem is like a note attached to a present. But we are uncertain who the recipient of this present was − while some suggest the powerful Fujiwara no Mototsune, an adored court lady is also not out of question, and therefore the poem can be read as an elegant yet formal note, or as an expression of great care and even devotion to a lover.

The poem itself is simple, yet its imagery is elegant and touching. In this poem, not only the classical vocabulary and grammar are incredibly close to modern ones, but the poem also forgoes the waka tropes, frequent in other Hyakunin Isshu compositions. This makes the poem, although written in classical Japanese, one easiest compositions to grasp with only the knowledge of modern language, and as the lines beautifully flow from one to another, a simple yet moving image emerges.

The opening line − kimi ga tame − can most easily be translated as for you or for your sake. Here you (kimi), signifies a person of high rank, and as already mentioned, it may have been a political ally, but it also could have been a beloved court lady.

Haru no no ni idete / wakana tsumu means (I) head out to fields of spring and / gather first herbs. As this is classical Japanese poetry, tsumu is used in rentaikei 連体形 (attributive form) and it therefore modifies wa (I, myself) in the following line wa ga koromode ni. This little titbit, however, is hardly consequential to the final translation, as focusing the translation around it would transform the whole poem in unwanted cumbersome ways. Wa ga koromode ni means upon my sleeves and leads to the last line − yuki wa furitsutsu. This line is identical to the closing phrase in the fourth Hyakunin Isshu poem by Yamabe no Akahito 山部赤人 (dates uncertain), where snow keeps falling upon the lofty peak of Fuji (Fuji no takane ni / yuki wa furitsutsu). Here, the scene is a lot less grand, as snow keeps falling upon my sleeves (wa ga koromode ni / yuki wa furitsutsu), but it is nonetheless a touching, suggesting devotion strong enough to head out into the fields while the cold snow is falling.

I head out to spring fields

As the first herbs would be eaten in hopes of good health, the poem has a connotation of wishing good health to the recipient. Whether the imperial prince gathered the herbs himself, we cannot tell for sure, − as an imperial prince, he may not have had a chance to do it, − but his poetic effort speaks of his strong devotion to someone very close. At the same time, his imagery, contrasting the green of herbs and whiteness of snow, sings of the first signs of change in seasons, and celebrates new, hopefully healthier beginnings.

Principal Collections of waka
as discussed on this blog