Note that though we may be apart, if I am to hear that you pine for me as Inaba mountain pines, I shall return to you. 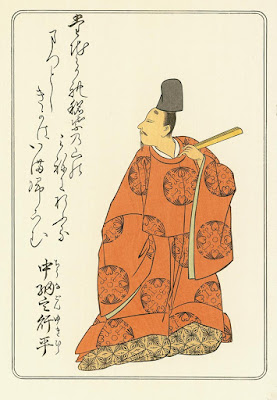 Unlike his younger half-brother, Yukihira was a relatively successful courtier. In 855 he was appointed as governor of Inaba 因幡 province, by 882 he rose to the position of Middle Counselor or Chūnagon 中納言, from 883 to 887 he served as Minister of Popular Affairs (民部卿 Minbukyō). During this time he sponsored the oldest known poetry contest or uta-awase 歌合 – Zai minbukyō no ie no utaawase在民部卿家歌合 (Minister of Popular Affairs Contest).

There were masters of the elegant style, like the Ono Consultant [Takamura], and of the refined style, like the Ariwara Counselor [Yukihira], but all were known for their proficiency in Chinese poetry. (trans. Craig McCullough 1985, 258)

Despite the fact that only his poetry in Chinese is mentioned in the Kokinshū preface, Yukihira is attributed eleven waka 和歌 or Japanese poems in imperial anthologies. However, only the four in Kokinshū and another four in Gosenshū 後撰集 (Gosen wakashū後撰和歌集 Later Collection of Japanese Poems; 951) can be considered authentic (Mostow 1996, 190). 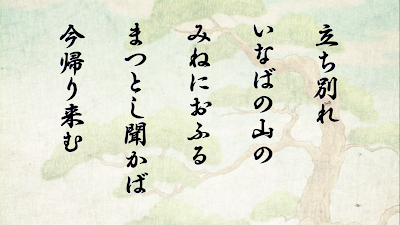 ...if I am to hear that you pine for me
Yukihira‘s poem selected for Ogura Hyakunin Isshu 小倉百人一首 seems to be directly tied to his biography. Although in the 8th book of Kokinshū (Parting) the poem is preceded by words dai shirazu 題知らず (topic/occasion unknown), the poem itself suggests that it was created at the time Yukihira left for Inaba as a governor.

It is believed that the poem was read in front of people seeing him off to Inaba (Kubota 2009, 25), but a modern super-liberal interpretation by Sugita Kei 杉田圭 in Chōyaku Hyakunin Isshu: Uta Koi  超訳百人一首 うた恋い。(Volume 2) seems to suggest that the poem could be read as a poem for his wife, whom Yukihira left in the capital when leaving for Inaba.

The poem itself pivots on two kakekotoba 掛詞 or pivot-words, which allow for layering of meanings. As in many cases, kakekotoba are left in hiragana, hence not imposing one meaning, as a kanji does. In this poem, the kakekotoba are inaba いなば and matsu まつ matsu.

Inaba is both a place (written as 稲羽) and a form of verb inu  往ぬ, meaning to leave, while matsu means both a pine tree (松) and to wait (to pine for someone; 待つ), making it possibly the only kakekotoba that can translates into English and can remain a kakekotoba.

Kakekotoba work by being the end of one phrase and the beginning of another, while at the same time taking two different meanings. This poem with two kakekotoba can be divided into three pieces, that when layered together convey the occasion, the feelings and even a promise of coming back.

Everything preceding matsu まつ in this poem works as jokotoba 序詞or a sort of preface to the main idea. The jokotobahere modifies matsu, highlighting the last two lines, likely read with matsu in the to wait meaning.


Pines of Suma
There is a famous, although undocumented tradition that Yukihira was banished to Suma 須磨 for three years (McMillan 2008, 134) during the reign of Emperor Montoku (文徳天皇 Montoku Tennō; 827–858), who reigned from 850 to 858. The story is recorded with a poem in one of the headnotes in Kokinshū and may have set the precedent for the exile of prince Genji in The Tale of Genji (源氏物語 Genji Monogatari; early 11th century).

The stories about Yukihira’s banishment to Suma also led to a nō 能 play Matsukaze 松風 or Pining Wind, which tells a story of two fisher girls – Matsukaze and her sister Murasame (Autumn Rain) – who wait for Yukihira after his return to the capital (Mostow 1996, 190). The Hyakunin Isshu poem, where the word matsu is prominent, is also used in the play.

The Kokinshū poem and its headnote, from which the tradition most likely stems, reads:

If there was a poem that was began with sounds close to Taichi’s name, it would have to be this one – tachi-wakare. Although it is not an exact match, the poem roughly matches character’s actions in the story. At the same time, the poem implies that when Taichi leaves, he will return, as soon as he knows someone is waiting for him. 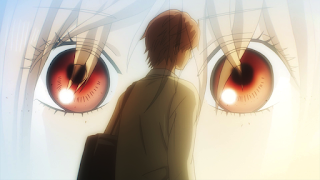 Though we separate, if I am to hear that you pine for me as Inaba (If-I-Leave) Mountain pines, I shall soon return.