Impassionate gods have never heard of crimson that lies in the Tatsuta River. 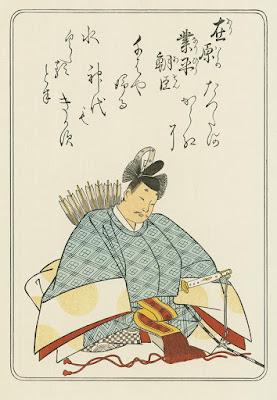 Rather than for his political career, Narihira is known as a poet and the most-likely main protagonist of Ise monogatari 伊勢物語 (The Tales of Ise). Eighty seven of his poems are included in imperial anthologies and he is included in both Ki no Tsurayuki's 紀貫之 (866?–945?; poem 35) list of Six Poetic Immortals 六歌仙 (Rokkasen) and in Fujiwara no Kintō's 藤原公任 (966–1041; poem 55) list of Thirty-six Poetic Immortals 三十六歌仙 (Sanjūrokkasen). 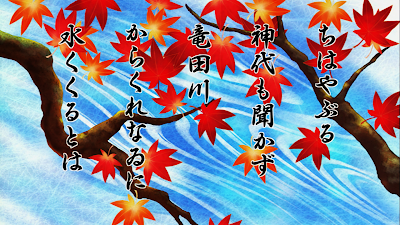 The scarlet of Tatsuta
The chihayaburu poem in Ogura Hyakunin Isshu 小倉百人一首is by now probably the best-known poem of the anthology. Although scholars note that it is difficult to call this poem a representative poem of Ariwara no Narihira (Kubota 2009, 26), its inclusion in the Hyakunin Isshu, as well as the variety of ways to read it and the stories it easily lends itself to, makes the poem a fascinating and memorable work. There are a couple of ways to read the poem.

First way is to follow the traditional reading. Through the ages, it has been read as an autumn poem. Included in the fifth book of Kokinshū 古今集 (Collection of Early and Modern Japanese Poetry; 905), which is dedicated to autumn poems, it is essentially seen as depicting an autumnal landscape. This reading is obvious when analyzing the poem line by line.

Chihayaburu ちはやぶる（千早ぶる） – the first word in the poem is a makura-kotoba 枕詞 or a pillow word – a fixed expression, which can be found in other poems as well. Although meanings of makura-kotoba have been lost to time, chihayaburu is thought to mean exhibiting power and in this poem it modifies kami 神 (gods).

The kami that chihayaburu modifies is not left alone and is used in kami-yo 神代, meaning age of the gods. This age of the gods is not simply an age long ago, but the age when miraculous events took place. But even (mo も) in this miraculous age, something was unheard of (kikazu 聞かず). The first two lines connect to: unheard even in the age of powerful gods.

In a sense, the poem ends here, with kami-yo mo kikazu 神代も聞かず. That is because the negative particle zu ず is used in shūshikei 終止形 or the final form, which marks the end of a sentence, end of the poem (punctuation did not exist in classical Japanese). This makes the poem stand out, because the poem uses inversion, moving the actual last two lines to the very front. In reality, the poem starts with Tatsuta-gawa 竜田川 (Tatsuta river).

Tatsuta-gawa of the third line is a river in historical Yamato 大和 province, modern-day Nara 奈良 prefecture. Even over a thousand years later, it remains a famous spot for seeing autumn leaves.

The autumn leaves are not specifically mentioned, but a specific shade of red is. Karakurenai からくれなゐ（唐紅）refers to vivid red or scarlet. Prefix kara 唐 indicates that the colour was introduced from the mainland. (Click to see karakurenai.)

The last line of the poem is a topic of debate, though. In the waters of Tatsuta river, just how does this scarlet look? Because classical Japanese did not differentiate sounds like k and g, the last line can be read as either as mizu kukuru to wa 水くくるとは or as mizu kuguru to wa  水くぐるとは. The original Kokinshū reading seems to have been mizu kukuru to wa, referring to water tie-dyed in scarlet. The poem then reads something along the lines of:

Unheard even in the age of powerful gods, the waters of Tatsuta, tie-dyed in scarlet.

Then it would be nothing more, nothing less than a stunning autumn scenery. Fujiwara no Teika, however, seems to have read the last line as mizu kuguru to wa (Mostow 1996, 192), which changes the meaning to water flowing under scarlet. The poem then sounding more like:

Unheard even in the age of powerful gods, the waters of Tatsuta, flowing under a layer of scarlet.

This second reading with mizu kuguru to wa can be interpreted as a love poem, where water flowing under autumn leaves hides passionate undying love. Although this interpretation is not well-established, it stems from the Kokinshū headnote and legends surrounding Ariwara no Narihira. The Kokinshū headnote of the chihayaburu poem reads:

Composed on the topic of autumn leaves floating on Tatsuta River, as painted on a screen belonging to the Second Ward Empress [Fujiwara no Kōshi] when she was still called the Lady of the Wardrobe of the Spring Palace [that is, mother of the crown prince].” (Mostow 1996, 192) 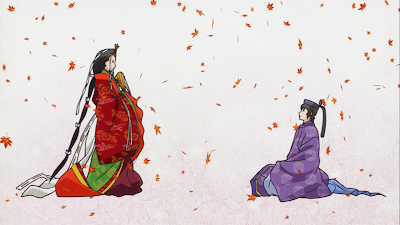 Second Ward Empress (二条后 Nijō no kisai/kisaki) or Fujiwara no Takaiko 藤原高子 (also read as Kōshi; 842–910) was daughter of Fujiwara no Nagara 藤原長良 (802–856), consort of Emperor Seiwa (清和天皇 Seiwa tennō; 850–881) and mother of Emperor Yōzei (陽成天皇 Yōzei tennō; 869–949; poem 13). Before becoming the consort of Emperor Seiwa, Takaiko served Fujiwara no Nobuko 藤原順子 (also read as Junshi; 809–871), who was also known as Fifth Ward Empress (五条后  Gojō no kisai/kisaki). Serving the empress meant that Takaiko belonged to the palace of that empress and lived there. And around that time, Narihira is believed to have taken interest in her. Book fifteen (Love 5) of Kokinshū starts with a long headnote and Narihira‘s poem that reads: 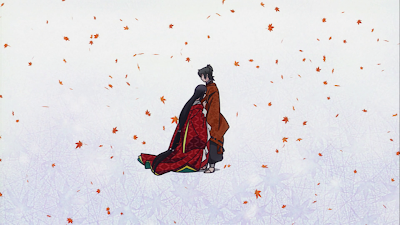 This poem is considered a lot more representative of Narihira as a poet, while its headnote connects the two poems through Fujiwara no Takaiko, as lady-in-waiting of Fifth Ward Empress and, years later, as the Second Ward Empress herself. If the story about Narihira and Takaiko is to be believed, then the chihayaburu poem could indeed be read as a well-disguised poem of passionate love.

And indeed, many more stories of an unnamed man visiting the future Second Ward Empress, when she was still a commoner, are told in Ise monogatari. Although the man is never named, he is believed to be Ariwara no Narihira because many of his poems are used in the tales. In addition, in Chapter 63 the man is mentioned as „Ariwara middle captain”, a position that Narihira held at the end of his career (Shirane 2007 194).

The chihayaburu poem is also included in Ise monogatari. There, however, it leaves us wondering, which story actually holds true, as it is recorded in chapter 106 with a brief note that reads:

Long ago, while accompanying some princes on an excursion, the man composed a poem beside the bank of the Tatsuta River. (trans. MacMillan 2016)

And so, while we do not know the correct way to read the poem, we are allowed multiple interpretations that only add more charm to it. 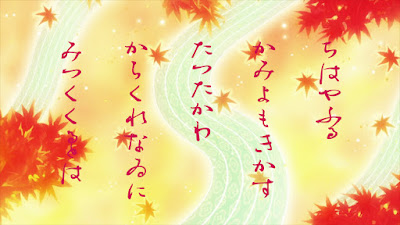 It is Chihaya’s name poem, introduced as such by Arata in the 1st episode of season one, when he points out that Chihaya is a good name, because it has its own card. In the 2nd episode, which takes its title from the second part of the poem – karakurenai ni からくれなゐに, it becomes the card that allows Chihaya to beat Taichi in school karuta competition and win her first karuta match.

In episode 6 (season one), we are introduced to the two interpretations of the poem. Whereas Chihaya thinks the poem talks about how beautiful the Tatsuta river is when it’s completely red, Kanade says that is the universal interpretation, but she gives the second one, which reads the poem as one of passionate love. She says:

Did you know that Nijo no Kisaki was in love with Ariwara no Narihira before she married the emperor? This poem was displayed on a folding screen in the palace. Some accounts say that Nijo no Kisaki was the one who requested the poem. I like how Narihira concealed his passion for her in a scenic rendering, since he wasn’t able to forget about her. Chihayaburu is a decorative word for gods that implies great force. The red river can be interpreted as water passing under red leaves or as tie-dyeing, but I believe that the scarlet leaves represent love that never faded.

Kanade also notes, that “Classical poetry [waka] becomes fascinating when you know the history behind each poem.”

Which is true, because the stories about poets and their times can provide additional layers to their poems. There are many ways to read the Hyakunin Isshu, reading poems with their surrounding texts is one of them.