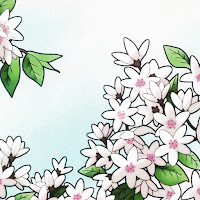 When I must hide these burning feelings, I feel as though my body is on fire with Ibuki mugwort. 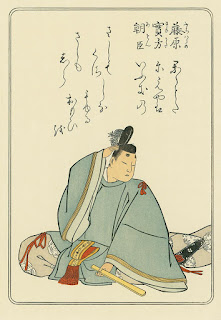 Fujiwara no Sanekata 藤原実方 (around 958−999) was a court official and poet but not much about him is known for certain. While records of his ranks and appointments remain, ones of his birth do not survive, so even his year of birth is deducted from knowledge that he died at the age of forty. He is mentioned in the texts of his contemporaries, but his own words remain only in poetry, most notably his personal poetry collection (家集 kashū).

Like the vast majority of his contemporaries, Sanekata was a courtier, but while his lineage promised success, his luck pointed towards the opposite. Sanekata was son of Fujiwara no Sadatoki 藤原定時 (dates uncertain), grandson of Minister of the Left (左大臣 sadaijin) Fujiwara no Morotada 藤原師尹 (920−969), and great-grandson of another prominent statesman Fujiwara no Tadahira 藤原忠平 (880−949; Hyakunin Isshu 26). Sanekata’s mother was daughter of Minamoto no Masazane 源雅信 (920−993), another Minister of the Left some years after Morotada. With such lineage, a great career in court was near at hand, but Sanekata’s father died at a young age and Masazane’s unwillingness to take him in meant that Sanekata was adopted by his uncle Fujiwara no Naritoki 藤原済時 (941−995).

At the time when family’s political support played crucial role in advancement, Naritoki, who he had careers of his own sons to take care of, could only offer so much. Therefore Sanekata’s career was limited and far from stellar. In 993 he reached the Upper Grade of Junior Fourth Rank (従四位上 jushi’i jō) and the following year he was promoted to Middle Captain of Left Division of the Inner Palace Guards (左近衛中将 sakon’e chūjō). But only a year later he was demoted to Governor of Michinoku (also read as Mutsu; 陸奥守 Mutsu no kami), and sent to the region far from the capital, into what was essentially cultural exile.

Because so little can be told of Sanekata’s life with a degree of certainty, anecdotes are not uncommon and the most famous one relates to his demotion to Provincial Governor. As the anecdote has it, Sanekata and another courtier got into an argument about poetry, and Sanekata ended up knocking the cap of his opponent off. At the time, losing one’s cap in public was as humiliating as if suddenly being thrown out into the public naked, therefore Sanekata was told by the emperor to “Go see some poetic locations (歌枕utamakura) for himself!” and demoted. Michikonu, known for many utamakura locations, became his post, and his eventual resting place.

We do not know if the argument on poetry actually took place, but Sanekata surely knew the ways of poetic composition. He was considered one of the exceptional poets of his day and the quality of his compositions is testified by sixty seven poems included in imperial collections from Shūishū 拾遺集 (Collection of Gleanings; 1005−1007) onwards, as well as his inclusion by Fujiwara no Norikane 藤原範兼 (1107−1165) into a list of Late Classical Thirty−Six Poetic Immortals (中古三十六歌仙 Chūko sanjūrokkasen).

But not only the poems in imperial collections remain. There is also Sanekata’s personal collection Sanekata Shū 実方集 (Personal Poetry Collection of Sanekata), which gives the best glimpse into the (love) life of the poet. The collection encompasses more than three hundred compositions of Sanekata and his contemporaries, − as some poems are in the form of exchanges, among which many are with ladies he seems to have been intimate with. One of such ladies was likely Sei Shōnagon 清少納言 (b. 965? − ?; Hyakunin Isshu 62), who mentioned Sanekata in a couple of episodes of her Pillow Book (枕草子 Makura no sōshi).

With lack of historical sources, Sanekata’s legacy is poetic, with poetic fame far outshining anything and everything he has achieved in his court career. But as history stays silent, legends emerge, and stories of Sanekata continue on, possibly even as part of Murasaki Shikibu’s 紫式部 (around 973–1014 or 1025; Hyakunin Isshu 57) famous Genji monogatari 源氏物語 (The Tale of Genji), for which Sanekata is thought to have been one of the inspirations. 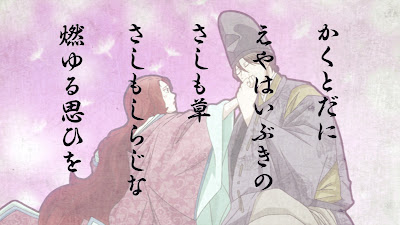 Fujiwara no Sanekata’s poem in the Hyakunin Isshu is a poetic tour de force on the topic of love. It is a composition that in 31 syllables utilises at least five poetic techniques: jokotoba 序詞 (poetic preface), kakekotoba 掛詞 (pivot words), engo 縁語 (associated words), utamakura (poetically significant place name), as well as inversion, which requires a kugire 句切れ (phrase break). This complexity, on one hand, makes the poem incredibly exciting and impactful as soon as the techniques are understood, but on the other, makes the poem almost impossible to translate.

Nonetheless, we may try.

Originally the poem was included in Goshūishū 後拾遺集 (Later Collection of Gleanings; 1086), in the first book of love poems, with a headnote: first letter sent to a lady. The headnote suggests that the poem was composed at the very beginning of the relationship, as a kind of self-introduction, and at this point the lady in question probably did not even know someone was interested in her.

Maybe that is the reason the poem starts off in indirect manner and then utilises a number of poetic techniques, which build meaning but also add to poem’s complexity and charm.

Firstly, it uses not one but two kakekotoba, breaking the poem into three phrases. In classical orthography, Ibuki would have been spelt Ifuki, and here the first kakekotoba (pivot word) emerges. Ibuki is a mountain that most commentaries locate on the boarder of old Ōmi and Mino provinces, modern day Shiga 滋賀 and Gifu 岐阜 prefectures; although another theory suggests the mountain was in Shimotsuke 下野, modern-day Tochigi 栃木 prefecture. But Ibuki written as Ifuki contains word ifu (to say), and it is this meaning that opens the poem.

The opening of the poem in itself is not particularly clear, because yearning is only implicit in kaku (meaning “in this way” or “like this”). Dani points to the lowest limit, expressing desire for more, but it is not until we decode ifu that it becomes clear what dani is about − it is about the desire to at least tell of implied this yearning. But as the negative e, with rhetorical question-indicating yawa shows, even telling of this yearning is impossible.

Following the poem further, ifu becomes part of Ibuki, which is a poetically significant place name and numerous poems throughout anthologies use the image, which is closely associated with Japanese mugwort or sashimogusa (also known was yomogi), used in moxibustion. As moxibustion has to do with burning, the associated words (engo) of the poem start to emerge: sashimogusa (mugwort), moyuru (burning), and hi (fire); the last one also happens to be the second kakekotoba. But more on it later, as there is also a poetic preface or jokotoba to take note of.

Ibuki no sashimogusa (mugwort of Mount Ibuki) is a jokotoba that modifies the second sa shimo. The repeating sashimo carry different meanings but add sound repetition to the poem. In the second sa shimo, sa is a demonstrative (meaning “like that”), while shimo adds emphasis. The following shiraji combines shiru (to know, to be aware) with negative ji, and na is an exclamation, which naturally signals the end the poem. And the poem ends but not really because it uses inversion and the fourth phrase (sa shimo shiraji na) is the phrase break.

The last line − moyuru omoi wo, includes the second kakekotoba and actually slots in right before shiraji na. Moyuru is a form of verb moyu (to burn), while omoi means “yearning”. It can mean “thoughts”, but in love poetry it most often refers to longing for someone, and such is the case here. Additionally, in the classical orthography omoi is written as omohi, which allows for the kakekotoba, where hi of omohi means “flame”. Therefore, the longing (omoi) is like the fire (hi) burning (moyuru), and the lady in question, − she is absolutely unaware (shiraji na)!

Could I say it? I cannot.

this passion of mine burns!

By combining and intertwining numerous poetic techniques in a masterful composition, Sanekata sings of impassioned longing of someone still unaware. He sings of the feeling familiar to many and starts off almost indirect, but then employs imagery of Ibuki mugwort, used for moxibustion, and is able to suddenly take the feeling to the extremes, to levels of physical pain and crystal clarity. And while it is a difficult composition, it works to showcase why Sanekata was considered one of the best of his day.