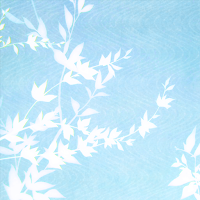 Since I could not hide my love, people would ask if I was pining for someone.
Taira no Kanemori 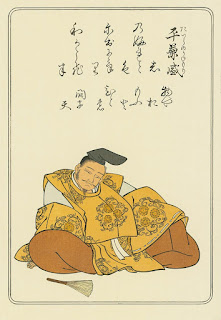 Taira no Kanemori 平兼盛 (?−990) was a courtier of mid-Heian period (平安時代 Heian jidai; 794−1192). He was a descendant of Emperor Kōkō (光孝天皇 Kōkō tennō; 830–887, Hyakunin Isshu 15) and is believed by some to have been the biological father of Akazome Emon 赤染衛門 (dates unknown; Hyakunin Isshu 59).

As a courtier, Kanemori was not particularly successful, only rising to the Upper Grade of Junior Fifth Rank (従五位上  ju goi no jō) and ending his career as a governor of Suruga 駿河 province (modern-day Shizuoka 静岡 prefecture).

As a poet, however, Kanemori is considered one of the representative poets of the Gosenshū 後撰集 (Later Collection; 951) period and is one of Fujiwara no Kintō's 藤原公任 (966–1041; Hyakunin Isshu 55) Thirty-six Poetic Immortals (三十六歌仙 Sanjūrokkasen).

Poems on the topic "Love, Concealed" at the Poetry Contest at the Inner Palace

Kanemori’s shinoburedo poem was originally included in the first book of love poems (book eleven in total) of Shūishū, where it was presented under a headnote, stating the composition is from a Poetry Contest of Tenryaku Era.

The Shūishū headnote is most likely mistaking the era, as the poem was composed and matched against Mibu no Tadami's 壬生忠見 (dates uncertain)  koi su chō 恋すてふ composition (Hyakunin Isshu 41) not during the Tenryaku 天暦era (947–957) but in the fourth year of Tentoku 天徳 (957–961), in a contest known as Poetry Matches at the Inner Palace in Tentoku 4 (天徳四年内裏歌合 Tentoku yo’nen dairi uta-awase). It was a contest hosted by Emperor Murakami (村上天皇 Murakami tennō; 924–967) in 960, after nearly a month of preparation, with some of the finest poets of the day participating, and it was an event “to be remembered as an outstanding example of the courtly poetry match” (Shirane 2007, 594). Today, four different records of the said poetry contest survive, allowing to identify the circumstances of poem composition.

Kanemori's shinoburedo (right) and Tadami's koi su chō (left) [sides were assigned to poems in a match] poems were matched in the last of twenty rounds of the competition. The set topic for the round was concealed love (忍ぶ恋 shinobu koi) and the judge was Minister of the Left (左大臣 sadaijin), Fujiwara no Saneyori 藤原実頼 (900–970). According to records, Saneyori found both poems outstanding, so he yielded to Minamoto no Taka’akira 源高明 (914–983) but he too was unable to decide. The Kanemori's shinoburedo poem was declared winner because the Emperor seems to have quietly recited it to himself.

...even though I hide it 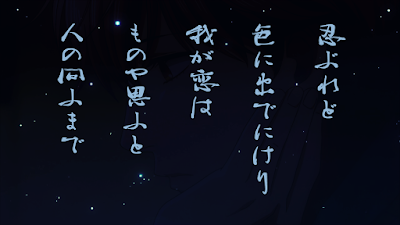 Kanemori's poem stands out for its use of inversion and  conversational language, through both of which combined the author creates a layered and intriguing composition that unravels with each line. And while the poem seems to flow, it is in reality broken into two parts, the first one encompassing the opening two lines and marked by inversion, where the second line − iro ni idenikeri − is moved from its grammatically logical placement at the end of the poem to the second line; and the second part, comprised of the remaining three lines and standing out for the conversational quality.

In the two opening lines, − shinoburedo / iro ni idenikeri (although I hide it, it has appeared on my face), − the author masterfully plays with the idea of feelings showing on one’s face, despite the efforts to hide them. Shinoburedo in the first line reflects those efforts, as its base verb base verb shinobu can mean both to hide and to endure. But as it is used in perfective form (已然形 izenkei) shinobure and with a concessive conjunctive particle do (thus rendering the line to although I hide it), those efforts are are vain, and so the feelings are described as having appeared on one’s face (iro ni idenikeri). The face here is expressed by iro, which means colour, but among its meanings also has complexion or expression on one’s face. The surfacing of the feelings is involuntary and that is expressed by idenikeri (has appeared), which combines ide − continuative form (ren’yōkei 連用形) of verb izu (to reveal externally), with auxiliary verbs nu (in ren’yōkei − ni), which indicates completeness and emphasises the inability to control something; and keri (in final form or shūshikei 終止形), which in addition to indicating past tense, indicates surprise at noticing something for the first time.

Although I hide it, it has appeared on my face − in the first two lines Kanemori plays with the idea of something showing through on one's face, but he cleverly forgoes the word love, and only introduces it in the third line − wa ga koi wa, which can be translated simply as my love. But grammatically, the line establishes my love as the topic for the upcoming lines, which feature a distinct conversational quality and for which the poem has been highly praised (Mostow 1996, 260).

This conversation quality of the poem comes from a question in the fourth line – mono ya omou, which can be read as what are you thinking of? but also as whom are you in love with? This question is indicated by ya, which follows the noun, in this case mono. And this mono can mean both things and a person, thus allowing  for the aforementioned two readings. Clearly, the second one is more fitting, but the duality of possible interpretation only adds to the appeal of the composition, especially as omou also has multiple meanings and can mean to think of something or someone, but also to think fondly of someone, to love, − this second meaning often being overlooked, but clearly allowing for the double reading of the line.

The last line shows that the questions raised in the fourth line of the poem – what are you thinking of / whom are you in love with? – are not merely an inside monologue. They are asked by others, as the noun hito (people), used in the last line hito no tou made, always implies others and never oneself. Combined with tou (to ask), and made, emphasising how unexpected these questions are, the poem closes having moved from the subject hiding his feelings, to being expressly asked about them, thus signifying the word of his secret love has spread.

Although I hide it,

it has appeared on my face;

that love of mine,

people are even asking:

"Whom are you thinking of?"

Poems in Chihayafuru
Shinoburedo poem figures rather prominently in Chihayafuru. Although it is the name poem of Wakamiya Shinobu 若宮詩暢, it is also used throughout the first season of the animated series to show Taichi’s feelings towards Chihaya. 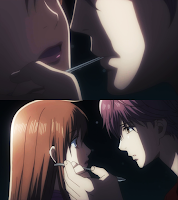 Episode 9 (S1) is called shinoburedo しのぶれど, which means Although I hide it. It is the episode about Mizusawa training camp but a couple of moments in the episode indicate Taichi’s romantic feelings towards Chihaya. Firstly, him stopping her from even trying to go into his room; secondly, him stealing a piece of her birthday cake in a very visually telling manner.

This theme of shinoburedo is returns in episode 23 (S1), when Kanade brings up the poem, this time together with koi su chō (Hyakunin Isshu 41) and their background story. Both poems – written on the same occasion, on a topic love concealed, both considered outstanding – through those poems Kanade puts Taichi’s feelings into words. Although not before he puts it into words himself – earlier in the same episode in his internal monologue he does say he is in love. The poems brought up in Kana’s internal monologue, however, highlight both the unchanging nature of human feelings and the power of expression that waka lends. 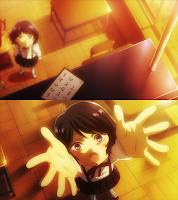 Shinobu
In episode 24 (S1), during the Queen match, shinoburedo is introduced as a card Shinobu is particularly good at. This card, however, is shown twice – the second time in a flashback, when little Shinobu’s classmates hide her cards everywhere. Shinoburedo is the last card she finds, the card shown being blown into her hands by the wind, as if showing the poem is part of her essence and she might as well be a character who hides something truly important.

Ogura Hyakunin Isshu 小倉百人一首 (Mount Ogura’s One Hundred Poems by One Hundred Poets) is a collection of 100 waka or Japanese poems, said to been selected by Fujiwara no Teika 藤原定家 (1162–1241) around 1235, possibly as a collection to decorate the sliding doors on either his own or Utsunomiya no Yoritsuna’s 宇都宮頼綱 (1172–1259) villa near Ogura 小倉 mountain.

Hyakunin Isshu encompasses roughly 600 years of Japan’s poetic history, and with the poems arranged in a more-or-less chronological order, the collection has long served as an introduction to Japanese poetry. Analysed, memorised and illustrated over centuries, the collection is also the basis of a karuta かるた card game, and as the game is a central of Chihayafuru ちはやふる series, Hyakunin Isshu has also gained some attention.

I write about Hyakunin Isshu poems, their authors, contexts and intertexts, ancient and modern. Recently, I started adding my own translation attempts and some analysis of poetic devices as well as the classical Japanese seen in those poems. For the list of poems already analysed, see the Hyakunin Isshu section.