When winds send waves crashing against the rocks, I recall how my own efforts were in vain. 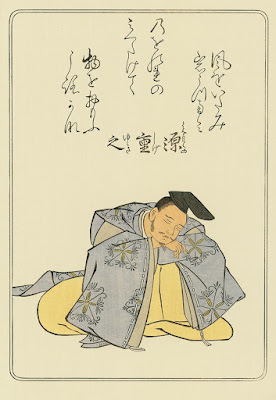 Shigeyuki himself was a governor of Sagami 相模 (modern-day Kanagawa 神奈川). When in 995 Sanekata was appointed gorvernor of Mutsu 陸奥 (modern-day Aomori), Shigeyuki accompanied him. Both Sanekata and Shigeyuki remained in Mutsu until death.

As a poet, Shigeyuki is considered one of Thirty-Six Poetic Immortals (三十六歌仙 Sanjūrokkasen), as selected by Fujiwara no Kintō 藤原公任 (966–1041). He has 67 poems in the third imperial anthology Shūishū (拾遺集 Collection of Gleanings) and later imperial poetry collections. A personal collection of his also survives. 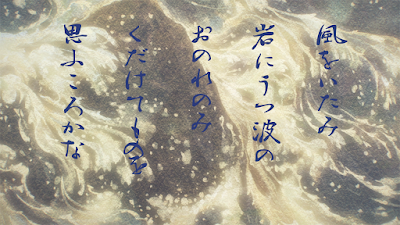 …a heart broken into a thousand pieces
Shigeyuki’s poem in Ogura Hyakunin Isshu 小倉百人一首is one of unrequited love, well described by Mostow as a poem that “compares a heartless lover to a rock that remains unmoved by the waves that beat against it.” (1996, 284)

The first two lines of the poem – Kaze wo itami iwa utsu nami no 風をいたみ岩うつ波の (Because the wind is strong, waves hit the rocks)  – serve as a sort of preface or jokotoba 序詞 that sets the stage for the main idea of the poem. Here iwa 岩 (rocks) serves as a metaphor for a cold, indifferent lover.

The jo directly modifies onore nomi おのれのみ (only me), where nomi means only and at the same time points to one-sided love. With onore nomi starts the part of the poem that expresses the main idea – [yet] only I am broken when I think of her! (Onore nomi kudakete mono wo omou koro kana おのれのみくだけてものを思ふころかな).

If I were to offer a quick translation [notice the exclamation mark at the end, in the original it is expressed by kana かな], it would sound like this:

Because the wind is strong, waves hit the rocks, yet only I am shattered when I think of her!

Truly this is, nothing more, nothing less, but a poem of unrequited love. While the waves crash onto the rocks that symbolize the lover in question, she is absolutely indifferent, and only the speaker is left with his heart broken into a thousand pieces.

Lastly, I would like to note why it is the speaker of the poem but not the author himself, whose heart is shattered. While some surviving poems are from actual correspondence and can be presumed to reflect feelings of their authors, the Shikashū 詞花集 (詞花和歌集 Shika Wakashū; Collection of Verbal Flowers; compiled in 1151–1154) headnote of this particular poem describes it as “composed when [Shigeyuki] submitted a hundred-poem sequence, during the time the Retired Emperor Reizei was still called crown prince” (Mostow 1996, 284).

The dating of Shigeyuki’s sequence is not precise but Emperor Reizei (冷泉天皇 Reizei Tennō; 950–1011) was a crown prince from 950 to 967 (Ibid.), so the sequence must have been composed in this 17-year window. 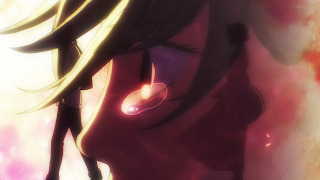 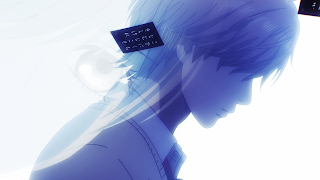 In the last episode of season 3, Chihaya uses the poem to express her devastation at how she behaved with Taichi throughout the years. Much like the interpretation above shows, she says: “I was the rock” into which the waves crashed, not moving her at all.

At the same time, her literature teacher Fukasaku gives a rephrasing of the poem, much like we would find in many Japanese editions of Hyakunin Isshu:

“When the winds are at their strongest, the waves crash into the rocks, only to fall apart themselves. Just like those waves, my own heart is in danger of breaking apart, as I continue to pine endlessly for you.” 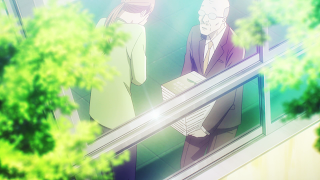 He also reveals just what the poems give to Chihaya, when he continues: “The Hundred Poets are truly remarkable, aren’t they? They give you the words, the metaphors to express yourself.”


Truly, Hyakunin Isshu is amazing in that way – giving voice to feelings that may otherwise have remained silent.